From Ariccia to Frascati, the lake of Nemi and Castel Gandolfo, the Castelli Romani are a perfect combination of food and wine, art and nature. If you have decided to spend a few days in Rome or nearby, you can't absolutely miss a tour in the area.
Along the borders of Rome, in the south-eastern area, this place has an incredible fascination, and it waits for you with its architectural beauties and tasty tradition. A tour around woods, wonderful aches, legends a few kilometres from Rome. Are you ready for a tour dedicated to the five senses, surrounded by nature and the most beautiful towns of Lazio? 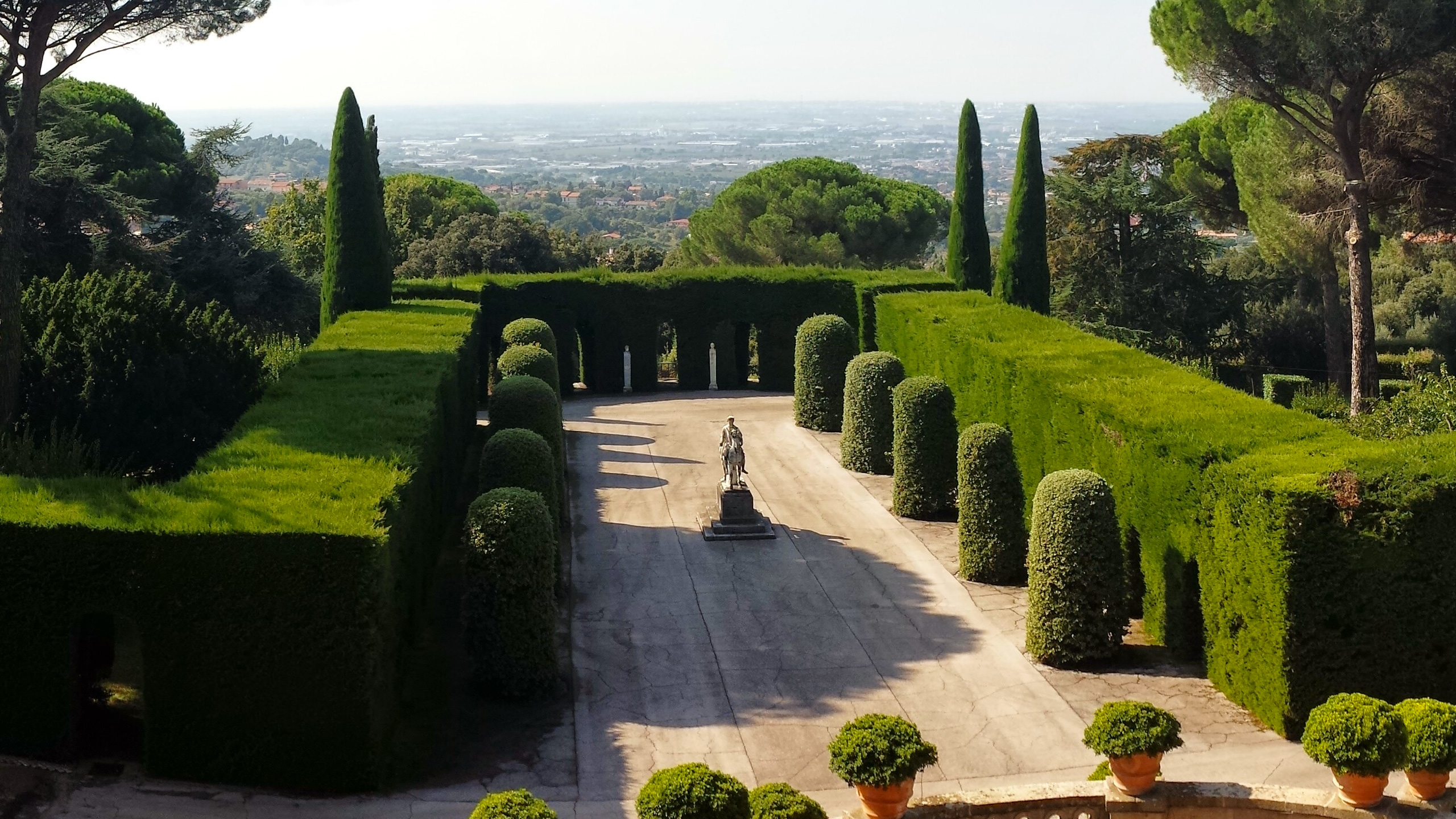 Frascati
The most famous town of Colli Albani is Frascati, at the bottom of the Tuscolo mountain, rich in monuments, including the 12 residences, built from the 16th century. Among these, we suggest you to visit Villa Aldobrandini, with its classic facade and the wonderful garden. Inside its walls, there are tens of frescoes by the artists of the time.
After the tour, we suggest you to visit one of the typical restaurants of the place, where you can taste delicious wines and desserts. The so-called "pupazza" deserves to be mentioned: it is made of pastry with the shape of a woman, decorated with the polyfloral honey from the Agro Pontino. One of the features of these biscuits is the woman is represented with 3 breasts, symbol of abundance. The local tradition tells the third one represents the most important production of Frascati: the wine. Don't go away if you haven't tasted the "pan giallo", made of almonds, pine nuts, cider zest, and spices.

Lariano
Lariano is situated under the Artemisio group of mountains, not far from Velletri. Today, Lariano is known for its baked products, made with the typical dark flour, but also for the famous Sagra del Fungo Porcino, the festival of mushrooms attracting thousands of visitors every year.
Its territory lies almost entirely in the Parco Regionale dei Castelli Romani and the woods surrounding the village offer the opportunity to make excursions. Lariano bread is one of the traditional products of Lazio, and it is baked only by chestnut wood.

Ariccia
Ariccia is another unmissable place in the tour of the Castelli Romani. The city centre is situated around Piazza della Repubblica, designed by Bernini in 1662, decorated by the church of Santa Maria dell'Assunzione. After a walk along the Ariccia bridge, from which you can enjoy a beautiful view of the surrounding countryside and the nearby coastline, you could stop to recharge the batteries at one of the typical "fraschette", a term used to indicate the traditional places of the city, which for centuries have delighted thousands of tourists.
Ariccia is famous all over the world thanks to the "porchetta", the flavoured and baked pork. Its preparation is the result of what the generations have preserved for centuries: the Latin tradition attributes the invention of the proceedings to the priests. A part of the meat used to be offered as a sacrifice to Jupiter Laziale, near the temple of Monte Cavo dedicated to the father of the gods. Today, what remains of the building is located in the nearby territory of Rocca di Papa.

Monte Porzio Catone
A nice walk should also include a stop in Monte Porzio Catone, where we suggest you to dedicate a few hours to visit the old town, the Church of San Gregorio Magno, designed by Carlo Rainaldi in 1666, and dedicated to Pope Gregory XIII, and by the interesting City Museum, where there are numerous archaeological remains.
One of the specialties of the area are the excellent wines. Don't go away without having enjoyed a nice glass of the nectar of the gods. In Monte Porzio Catone, there is also a "wine trade Museum", located in Via Vittorio Emanuele II. Accessible only on weekends, the museum presents a nice exhibition with interesting information about the wine history and the local productions.

Castel Gandolfo
Wonderful and picturesque balcony on Albano lake, the city of the Pope is considered one of the most beautiful villages of the peninsula. Castel Gandolfo is best known for being the summer residence of the popes, who chose it for the beauty of its surroundings and fresh air you breathe there. The town is included in the Castelli Romani Park and next to a fabulous nature it also has many places of historical and artistic interest, including the Villa of Domitian, with the Ninfeo Bergantino.
The other buildings, including the Church of San Tommaso da Villanova and the Bernini fountain, were built in the seventeenth century, when Castel Gandolfo became property of the Holy See. But the history of the town is very old and its origins date back to the Latin city of Alba Longa. Here, you can have lunch or dinner enjoying a fantastic view of the lake, at one of the many panoramic rooms overlooking the lake originated inside the ancient crater. A site visit is not possible without a stop at the Papal Palace, also known as "Delizia Carolina" and Villa Torlonia, appreciated for the beautiful neo-classical sculpture collection. Among the several personalities who stayed there, we can remember the German writer Goethe. So, if you have chosen the Hotel Cosmopolita for your stay in Rome, don't forget to discover the Castelli Romani area and all the secrets that make it so fascinating!