Discover Rome: The elegance of Piazza di Spagna, at the foot of the Pincio hill

Piazza di Spagna in Rome surely is one of the most picturesque corners of the city. It is a square celebrated in many works of art as well as novels and films, and Rome is worth of a visit even just for it. The strategic location of this place gives it an elegant and unique atmosphere few places in the world have. Let's discover, then, all the secrets of the beautiful Piazza di Spagna.

The story of Piazza di Spagna
Piazza di Spagna owes its name to the Spanish Embassy at the Holy See situated in this historical square. It has an oval shape and in the middle there is a beautiful fountain affectionately called the "Barcaccia", made in marble, by the sculptor Pietro Bernini and his son Gian Lorenzo. Part of the square is occupied by the beautiful Trinità dei Monti staircase that connects the square to the terraces of the Pincio. On the other side, however, there is Via Condotti, one of the temples of Roman shopping concerning high fashion.
In the square, then, there are many historical buildings. On one side, there actually is the building housing the historical residence of John Keats, the English poet who lived in Rome in 1821. Today, the residence has been converted into a museum, and it collects not only memories of Keats, but also about his fraternal friend and equally famous poet Shelley. In the left corner of this building, you can stop for a tasty break. There is indeed Babington's, an historical tea house, where you can sip a cup of the finest British tea, accompanied by a great slice of cake. On the opposite side of the square, there is the Palazzo di Propaganda Fide, a building owned by the Vatican. Opposite, there is a marble column created by Bernini, dedicated to the Immaculate Conception. On December 8th, every year the fire-fighters lay a wreath on the top of the column, in the presence of the Pope. Finally, on the top of the staircase, you can visit the church of Trinità dei Monti, a beautiful Gothic styled building of the sixteenth century. 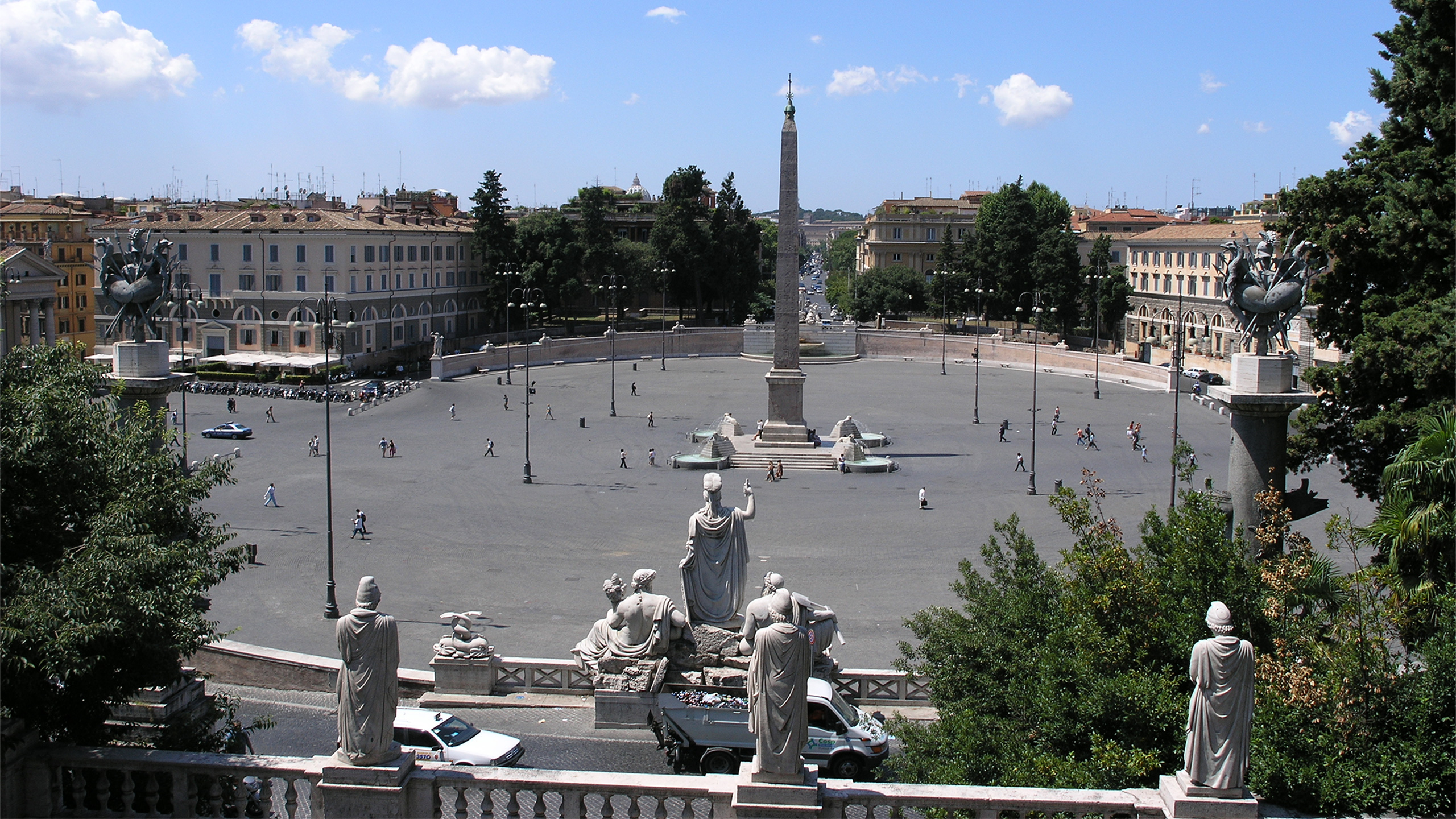 Trinità dei Monti and Pincio stairway
Among the monuments characterizing Piazza di Spagna, there certainly is the Trinità dei Monti stairway that connects the square with the Pincio, another very popular place for Romans and tourists. It is a marble and travertine staircase, built in 1723 by Francesco De Sanctis, well-known architect and sculptor of the time. The staircase is composed of eleven flights of steps, each one made of 12 steps. Every flight is separated by the other by a small open space that allows a great view of the square below and of the surrounding areas, getting even more beautiful the more you go up. On the top of the stairs there is the Church of Trinità dei Monti.
It is a realization from the mid 16th century, in pure Gothic style. Its construction was a will of King Louis XII who, although French, was the owner of the land. The church is made of stones coming from the French territory, in particular from the town of Narbonne. At the end of the staircase, you reach the Pincio Hill, favourite place of ancient poets like Lucullus, who built their residence there. From the Pincio, you can enjoy one of the most beautiful views of the entire city of Rome, especially of the old town and the District of Prati, formerly Imperial lands. In the Pincio gardens, you can also admire the marble busts of the characters who made the history of Rome and Italy.

Piazza di Spagna and art: a place in history and cinema
Piazza di Spagna is so beautiful and evocative it has become part of the collective imagination and a symbol of Rome. For example Cesare Pavese, a fine poet, mentions it in a famous poem. In memory of this event, next to the Babington's house, there is a plaque showing the entire text of his poem "I will pass by Piazza di Spagna".
Even cinema and television have been enchanted by this wonderful square. Many directors have actually wanted Piazza di Spagna as a location for the scenes of their films. In 1952, Luciano Emmer wrote and directed "Le ragazze di Piazza di Spagna", a film redone in a TV series with the same name in the 1990s. Even some foreign films and international colossal shot Piazza di Spagna. This is the case of the famous film Vacanze Romane, with the unforgettable Audrey Hepburn as a foreign princess who discovers and appreciates the beauty of Rome Piazza di Spagna, indeed. The suggestive Piazza di Spagna, however, is the ideal location for many events of worldwide interest. For example, every year, there is the cycle of fashion shows during the fashion week of Rome.

Where to stay in Rome to visit Piazza di Spagna
To properly visit Piazza di Spagna and all the other wonderful places of the city, it is necessary to choose an optimal observation point. So, if you decide to arrange a trip to the capital you should choose a hotel that ensures easy transportation. For this reason, the Hotel Cosmopolita is the right choice because it is ideally located in the heart of Rome, within walking distance to all major attractions.
The hotel offers single and double rooms, all with private bathrooms and all kinds of comforts to make your stay a unique and complete relaxation. Also, the hotel staff is always at the guests' disposal, to provide any information and help them to organize any tour of the city and its beauties. For availability and cost, or to have any other useful information to organise your tour to Rome from Piazza di Spagna, you can contact the staff of the Hotel Cosmopolita.