Rome in the dish: Farm-to-table Roman flavours in one of the most famous hotels of the Italian capital

Rome is universally considered the largest and most fascinating outdoor museum in the world. There actually are several monuments and points of interest attracting million of tourists from every part of the world every year. A real exodus to enjoy many extraordinary attractions such as the Fori Imperiali - the faithful witness of the magnificence of the centuries when Rome was a boundless empire - or Piazza Venezia and the Vittoriano, background of some events symbol of the Italian and European history dating back to beginning of the twentieth century.
If you are reflecting on spending a few days among the beauties of the Eternal City, you should know you will not find just history, art and culture, but also a huge culinary tradition. The Roman food is actually famous worldwide thanks to its peculiar taste and its authenticity, by top quality products grown with passion and love, in perfect harmony with the farm-to-table philosophy.

Breakfast at the Fori Imperiali
You can imagine an evocative tour in the magnificent Fori Imperiali, taking advantage of a tasty breakfast or snack, tasting some typical Roman desserts, such as the famous "Maritozzo". A goodness made in a very simple way, by common but genuine ingredients, such as the bread dough, oil, golden raisin, pine nuts, salt and sugar. According to your taste, the Maritozzo can be even tastier if you fill it with cream or custard and chocolate.
Another typical Roman dessert is the trifle: not only a healthy breakfast but also a worthy way to complete your meals. A delicacy made using the classic sponge cake, a little bit of rum for the syrup, alchermes, eggs, sugar, flour, milk and candied fruit. Maybe, late at night or in the afternoon, it will give you new energy to walk around the beauties of Rome, thanks to the characteristic typical biscuits known as sweet beans. They seem to be the almond paste also because among the ingredients there is the almond flour together with sugar - possibly in lumps - , white flour, eggs, lemon zest, cinnamon and butter at room temperature. And this is not enough! You can taste the typical Roman Pangiallo, the Pizza Sbattuta, chocolate snacks, the Cassola, and several types of tarts.

Lunch or dinner, always enjoying
In Rome, you can discover many artistic but also gastronomic treasures. The Eternal City is actually famous all over the world for its extraordinary dishes made with genuine products from an extraordinary territory cultivated following the farm-to-table philosophy. One of the tastiest dishes loved by tourists and travellers surely is the Saltimbocca alla Romana. It is a second course made of meat year-old calf with ham, seasoned with black pepper, butter, salt, sage and of great white wine.
Another very famous second course is the tasty Trippa alla Romana, a dish characterised by typical ingredients. To make it, it is actually necessary to cook the tripe, cheek lard, Pecorino Romano, and a mix of seasonal vegetables, such as celery, carrots, white onions, tomatoes, together with aromas and condiments, including extra virgin olive oil, mint, salt and pepper.
You finally blend everything by white wine.
Maybe you prefer to enjoy a first course with a very intense flavour that allows you to recover energy to continue your tour through the beauties of the Eternal City: a valid solution surely is the Spaghetti Cacio e Pepe. A simple dish born in the far countryside of Rome, nowadays symbol of the Roman food, very famous and loved. You have to make a mix of Pecorino Romano, Pecorino from Tuscany, cornstarch and milk. Obviously, you have to complete it by Spaghetti, pepper - in all its varieties -, to finally decorate everything by grated Pecorino cheese, extra virgin olive oil, basil and pepper. 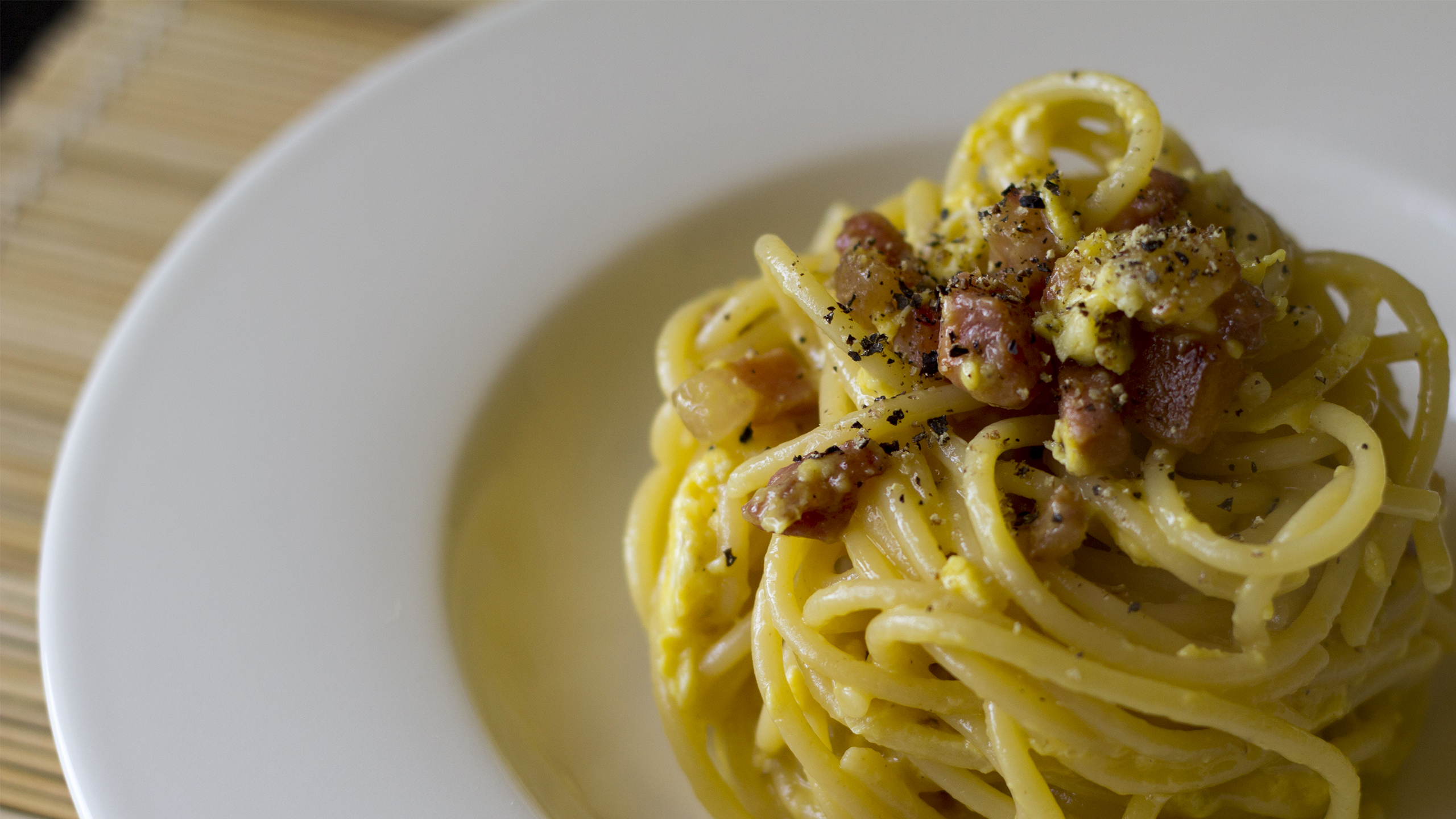 The good mix of art and food
If you are on holiday, or travelling for work, you can't say you have really discovered the Roman food if you haven't tasted Spaghetti alla Carbonara. It is one of the most representative dishes of the Roman tradition; according to tradition, it seems it was invented in a small inn in 1944, by a chef who tried to satisfy some hungry American soldiers. He mixed ingredients apparently having nothing in common, obtaining an extraordinary combination. The traditional recipe tells you have to use spaghetti, egg yolks, cheek lard, salt, black pepper, and the unmissable black pepper. Another dish made of simple but typical ingredients making you enjoy the quality of genuine food is the "Coda alla Vaccinara" - the tail of the ox. A recipe born in a tavern in the district where the Vaccinari - the slaughterers lived. The ingredients? Ox-tail, carrots, olive oil, celery, parsley, cloves, lard or cheek lard, onion, garlic, white wine, tomatoes, salt and pepper.
A way to taste the Roman farm-to-table food in a strategic point allowing you a tour by feet visit, to find some extraordinary attractions like the Fori Imperiali, Piazza Venezia and the Vittoriano a few steps from you is Hotel Cosmopolita. It actually offers you a wine bar where to taste an aperitif, taste a delicious dessert, a good drink or a rich dish by the Roman tradition This hotel is situated in Via di Santa Eufemia , a few metres from the Fori Imperiali and Piazza Venezia, and it offers a very high quality food.