The Palazzo Del Grillo is situated in the square with the same name, in the Monti district, in the historical heart of the Eternal City. It is a large eighteenth-century residence, characterized by a marvellous facade with a Baroque door and two lateral avant-corps. The central section of the building is merged with the so-called Torre Del Grillo or della Miliziola. It has the appearance of a medieval fortress and it is perfectly preserved; for a certain period, it has been owned by the famous Marchese Del Grillo – the marquis -, whose family finally disappeared in the area of Capranica. The marquis Onofrio Del Grillo became famous for his jokes, also inspiring the famous film by Mario Monicelli and Alberto Sordi. Among the several marquis' jokes, they tell the nobleman once proposed to a very wealthy Jewish merchant to give a "baiocco" - a coin of the period - for each object present in some of his treasure chests. The merchant accepted, sure to find treasures of inestimable value, and he even signed a contract that effectively caused his financial ruin: the treasure chests actually contained only pins and the merchant was forced to pay a very important sum.

Palazzo Del Grillo: a work of art in the residential area of the Monti district
After having belonged to the Marquis Del Grillo, the palace became property of the De Robilant family. Many famous people visited the building, including the famous painter Renato Guttuso. The central section of the building is on the top of the so-called Grillo climb, whereas the two avant-corps overlook Via di Campo Carleo and Via degli Ibernesi. Even today, it is possible to visit the splendid rooftop garden the Grillo family particularly liked. It is decorated by fountains, Baroque sculptures and nymphaeums, and nearby there is a large portal made of four columns completely surrounded by vegetation and flanked by statues of Mercury and Minerva. In the palace, a chapel and a gallery are well preserved, the latter decorated by stuccoes and white decorations with a classical style.
The left avant-corp is joined to the facade by an arched underpass, called "dei Conti". It consists of five floors and it also includes the medieval tower, several times restored and perfectly preserved. The right avant-corp consists of three floors. The tower, known as the Torre della Miliziola, in order to distinguish it from the highest Torre delle Milizie, was built in 1223 by the Carboni family. It successively became property of the Conti family, until it was bought by the Grillo family, in 1675. The latter decided to restyle it and make it stylistically similar to the rest of the building, adding also the original crowning with corbels, as indicated by the commemorative epigraph "Ex marchione De Grillis". Both bodies have windows decorated by friezes and spirals, shells and lion heads. In the garden, on the back wall, there is also a beautiful fountain consisting of a recess shaped like a shell and embellished with two hermas holding up vases filled with fruit. The work is by Balthasar Permoser, who made it in 1676. 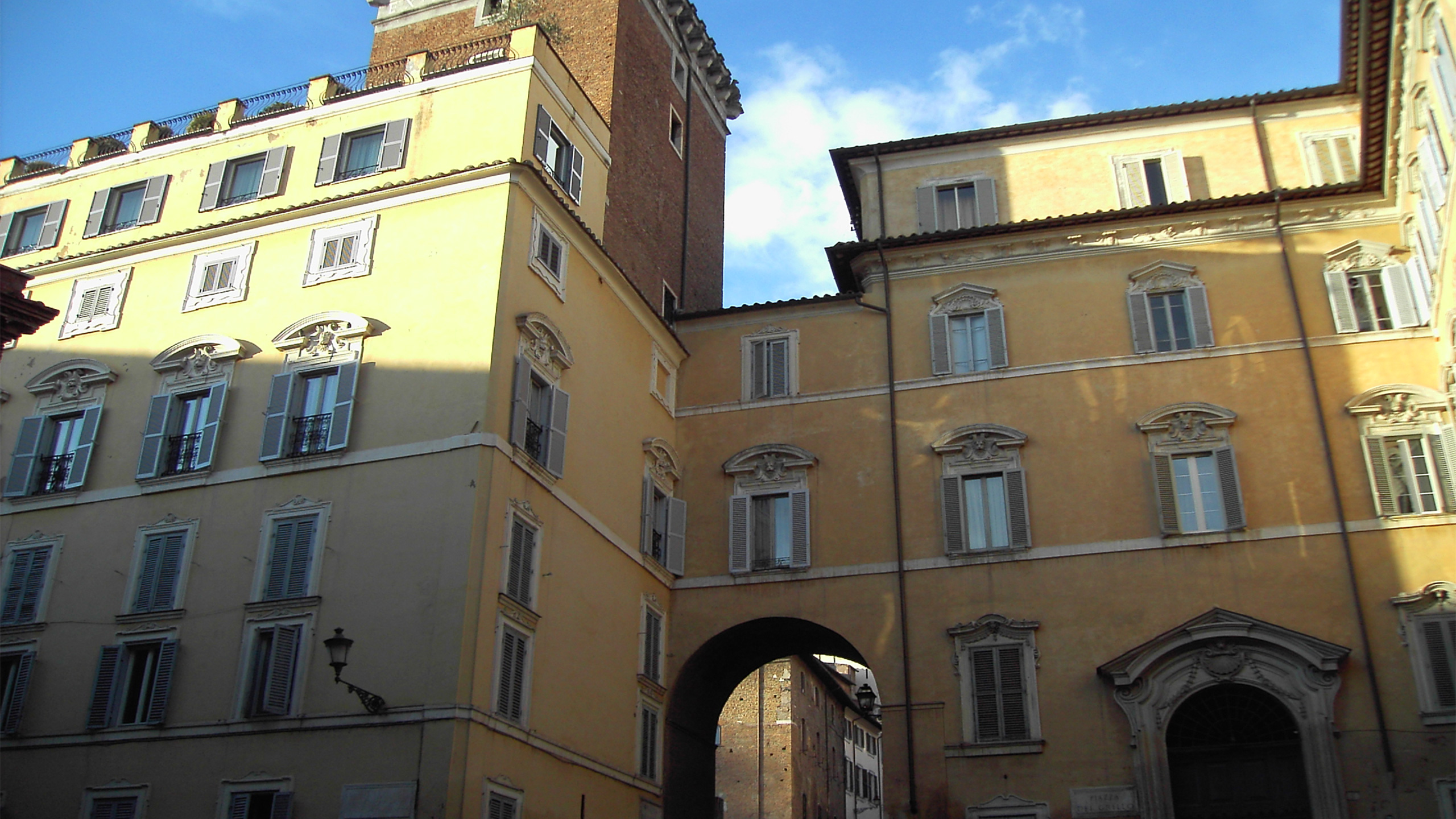 The legendary deeds of a famous character
In the building there are numerous rooms decorated by frescoes. Stuccoes and painted ceilings embellish most of the rooms, and there is also a gallery and a chapel, decorated by extremely precious stuccoes. In the nineteenth century, the palace became property of Nicolis de Robilant, whereas in the twentieth century, it housed the office where the famous painter Renato Guttuso made several of his masterpieces. Although the building has changed several owners, it is inextricably connected to the memory of the Marquis Del Grillo, loved and known by all the people in Rome and nearby. Unfortunately, most of the news concerning the marquis and his sumptuous residence have been handed down orally and therefore are not very reliable. Even today, we can't actually know what the exact dates of his birth and his death are. We only know he used to have fun upsetting the quiet life of his neighbours and the whole city, thanks to his jokes, often pointed at nobles and powerful people, guilty of pride, arrogance or avarice. Jewish people were among his favourite targets, often playing the role of wealthy merchants. The stories about the Jewish merchants are supported by the known antipathy the Marquis Del Grillo felt for those he used to call "li giudèi".

But... Are we sure this eighteenth-century Rome character really existed?
Do we certainly know the marquis of the Grillo used to spend part of his time planning extraordinary ironical jokes? Tradition likes telling it was really the truth: a so sui generis, rebel, scornful of risk and rules character, who hated disrespectful and violent people. According to what we know, it could be a legend to make fun of really existing nobles, unpopular among the inhabitants of the eighteenth century Rome. From the “Storia delle Famiglie Romane” - History of the Roman families - by Bertini, from the Capitoline Archives, we learnt two different Del Grillo families lived in the capital, from the second half of the seventeenth century to the end of the nineteenth century; we also know there is a family tomb inside the church of San Giovanni dei Fiorentini, and there are some evidences left by the chroniclers of the period reporting about the family. Raffaello Giovagnoli - writer, patriot and historian who lived between the nineteenth and twentieth centuries - confirms the existence of the marquis and he defines it as the last and most extravagant of the Roman feudal lords.

In short, if you want to walk along the footsteps of this very particular character of the Roman history, take advantage of your stay at the Cosmopolitan Hotel, follow the directions and reach this authentic piece of history of the city costume. The residence of Del Grillo family will amaze and make you relive the extravagant feats of our ironic and mysterious hero!