Stay in Rome: The terrace of the Hotel Cosmopolita, a breathtaking view on the Fori Imperiali

Rome, the eternal city, the capital of Italy and the pumping heart of a millenary culture that with its art, architecture and sense of civilization has been able to shape the world as we know it today. A mix of history, traditions, culture, arts and much more stormed at any time of the year by tourists and travellers from all over the globe.
There actually are many points of interest that can be visited on the Capitoline territory, starting from the famous Colosseum, up to the monumental Piazza San Pietro without forgetting the Fori Imperiali, Piazza Venezia, the Pantheon, the Trevi Fountain, Piazza di Spagna, the Vatican Museums and many others. A metropolis with so much to offer including food and wine, with its many delicacies, such as Pasta alla Carbonara, Pasta all'Amatriciana, oxtail, lamb chops, Spaghetti Cacio e Pepe, the famous classic Pecorino Romano cheese, and much more.

The magic of the Fori Imperiali
For those who want to make a real trip back in time, in the golden Imperial Rome, during which Rome was the undisputed queen of the world, you absolutely cannot miss a walk through the impressive Fori Imperiali. A glimpse of Rome made of squares built between the middle of the 1st century B.C. and the beginning of the 2nd century A.D., to celebrate the magnificence of some emperors able to leave the sign of their power and ideas. To be precise, the history of the Fori Imperiali began in the year 46 B.C., by an extraordinary Roman leader and politician: Julius Caesar. Caesar wanted to begin the construction of a huge square with his name, even it was completed during the time of emperor Augustus. A majestic structure with the temple of Venus in the middle, as it can still be admired today.

The Forum of Augustus and Nerva
The Fori Imperiali are not the only one square built by Julius Caesar; also other extraordinary futuristic buildings were designed and commissioned by equally influential characters. After the battle of Philippi - a civil war after the homicide of Julius Caesar and the division between the supporters of the Triumvirs and the Republicans -, Octavian promised to God Mars the built of a temple to thank him for the positive outcome of the war. The temple was erected after 40 years, and its remains are still visible in the Fori Imperiali; in particular, it was inserted in another square now known as the Forum of Augustus. A few centuries later, the Forum of Nerva was erected, as today you can see some remains including the entablature and the penthouse of the so-called "Colonnacce".

The majesty of Piazza Venezia and the Vittoriano
Continuing your walk among the beauties of Rome, after the Imperial age of the forums, it is possible to make a beautiful jump to the 20th century and admire the magnificence and majesty of Piazza Venezia and the Vittoriano. A long journey in the time, but just a few hundreds of meters, necessary to reach Piazza Venezia from the Fori Imperiali. The Vittoriano - also known as the National Monument to Vittorio Emanuele II - is an extraordinary example of modern architecture in Neo-classic style by three Italian architects: Ettore Ferrari, Pio Piacentini and Giuseppe Sacconi. A colossal work whose built started in 1885, finished 50 years later, in 1935, even if it was already inaugurated in occasion of the 50 years from the Unit of Italy, in 1911. It is a monument with a strong ethical and the cultural value, dedicated to the Italian Risorgimento, to the Unit of the country and in particular to Vittorio Emanuele II of Savoia, the first sovereign of the united Italy, and represented by an equestrian statue dominating the square. In addition to this, in this building, there is also the Milite Ignoto tomb, near the Altare della Patria, in memory of the several soldiers who donated their own lives for the wealth and the glory of their land.
Also in this location, many ceremonies and significant moments in the history of Italy have taken place, as the celebration of the Republic day scheduled for June 2nd, each year, the anniversary of the liberation on April 25th, and the National Unity and Army day, celebrated every November 4th. In short, a mystical place where many crucial episodes of contemporary history took place. 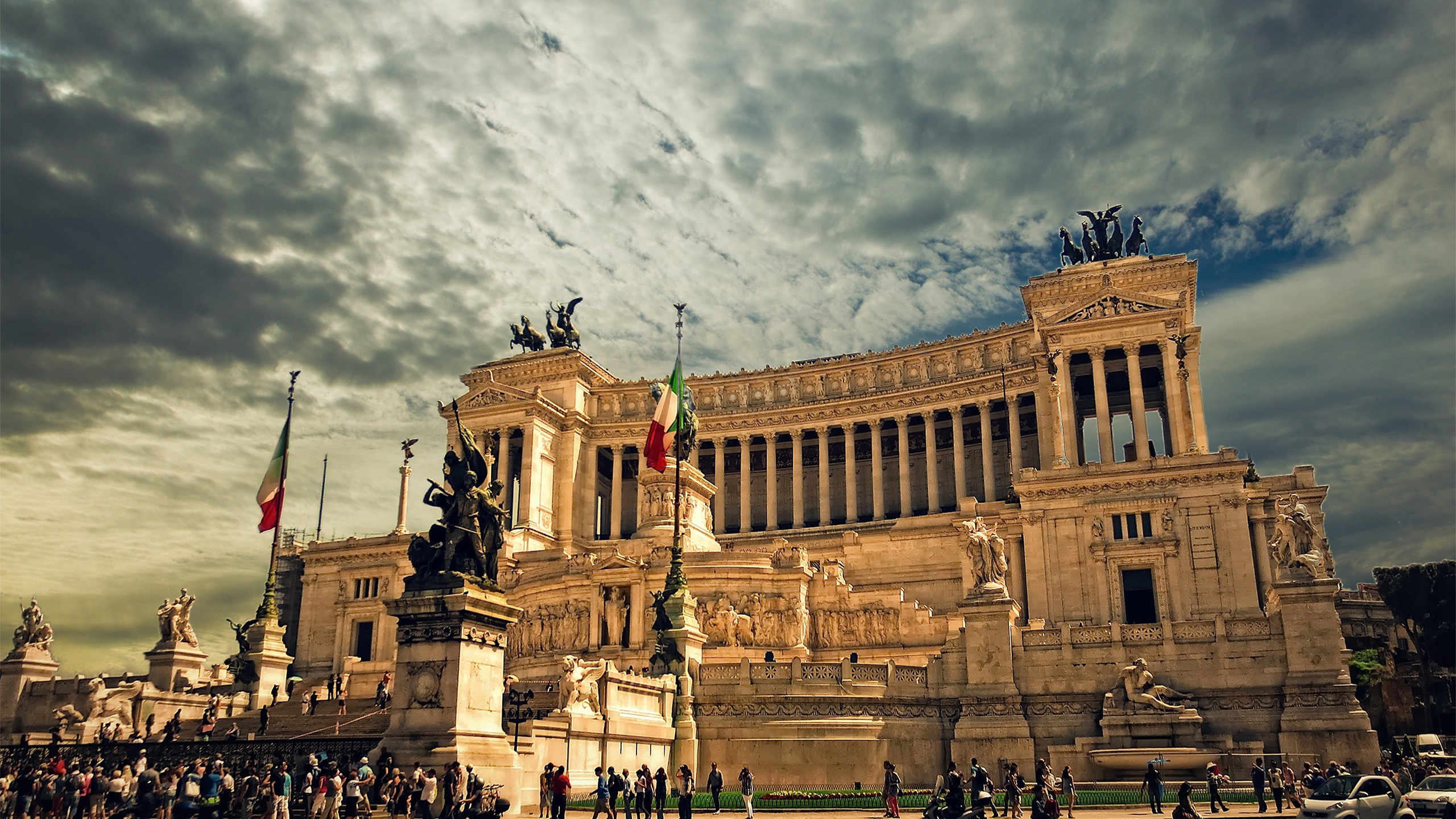 A fascinating way to see the Fori Imperiali and Piazza Venezia
The Fori Imperiali and Piazza Venezia with the several monuments are two areas strongly characterized by the true essence of "Romanity"; an extraordinary concentration of history and art, symbolically melting some of the several glorious moments of this city. However, to admire the magnificence in the best way, you can take advantage of the great location of the Hotel Cosmopolita panoramic terrace, in via Santa Eufemia.
This building is located behind the Fori Imperiali and the Vittoriano, and it offers a picturesque view over them, both during the day and during the night, a play of lights and colours really one-of-a-kind. What could be more enjoyable than eating a tasty appetizer or enjoy a meal full of recipes by the culinary tradition and at the same time enjoy the background with the magnificent view of the Fori Imperiali, where many political and religious disputes took place, and the Vittoriano? The Hotel Cosmopolita is also a strategic location where to stay, as it located a few metres from a large number of tourist sights of Rome like the Colosseum, the Circus Maximus and many others.