Staying in Rome: the Fori Imperiali and a corner of eternity

The Fori Imperiali are one of the places in Rome full of history and value. Over the time, hundreds of protagonists of the Roman history passed there, some of the most important and spectacular buildings of the capital of the Empire were built there, and thousands of personal or political stories of the ancient Urbs took place there. So you can't miss to spend some hours visiting the Fori Imperiali, the monumental squares in the heart of Rome, built between the 45 B.C. and the 113 A.D. They actually were the pumping heart of the commercial and political Empire life, where the daily life of several people enchanted million of visitors. Ready to learn more?

History and features about one of the world's most important archaeological complexes
Once you enter the amazing monumental complex of the Fori Imperiali, you will be in front of the Forum of Caesar, a square built by Julius Caesar to increase his popularity. The area was inaugurated on September 26th, in 46 B.C., a few years before Caesar death, but completed by his successor, the Emperor Octavian Augustus. The square has a portico on the Eastern and Western sides, and the Temple of Venus Genitrix, Aeneas' mother, so progenitor of Iulia gens. The surface where it was built was directly purchased by Julius Caesar, who wanted to put his forum near the buildings of the old city centre, to give it greater prestige and visibility. Differently from the Roman Forum, this new square was part of a single project: the area was actually long and narrow, surrounded by two porticoes on the long sides, hosting the equestrian statue of Caesar in the middle. The plant focused on the Temple of Venus and its apses housed the statue of the goddess. 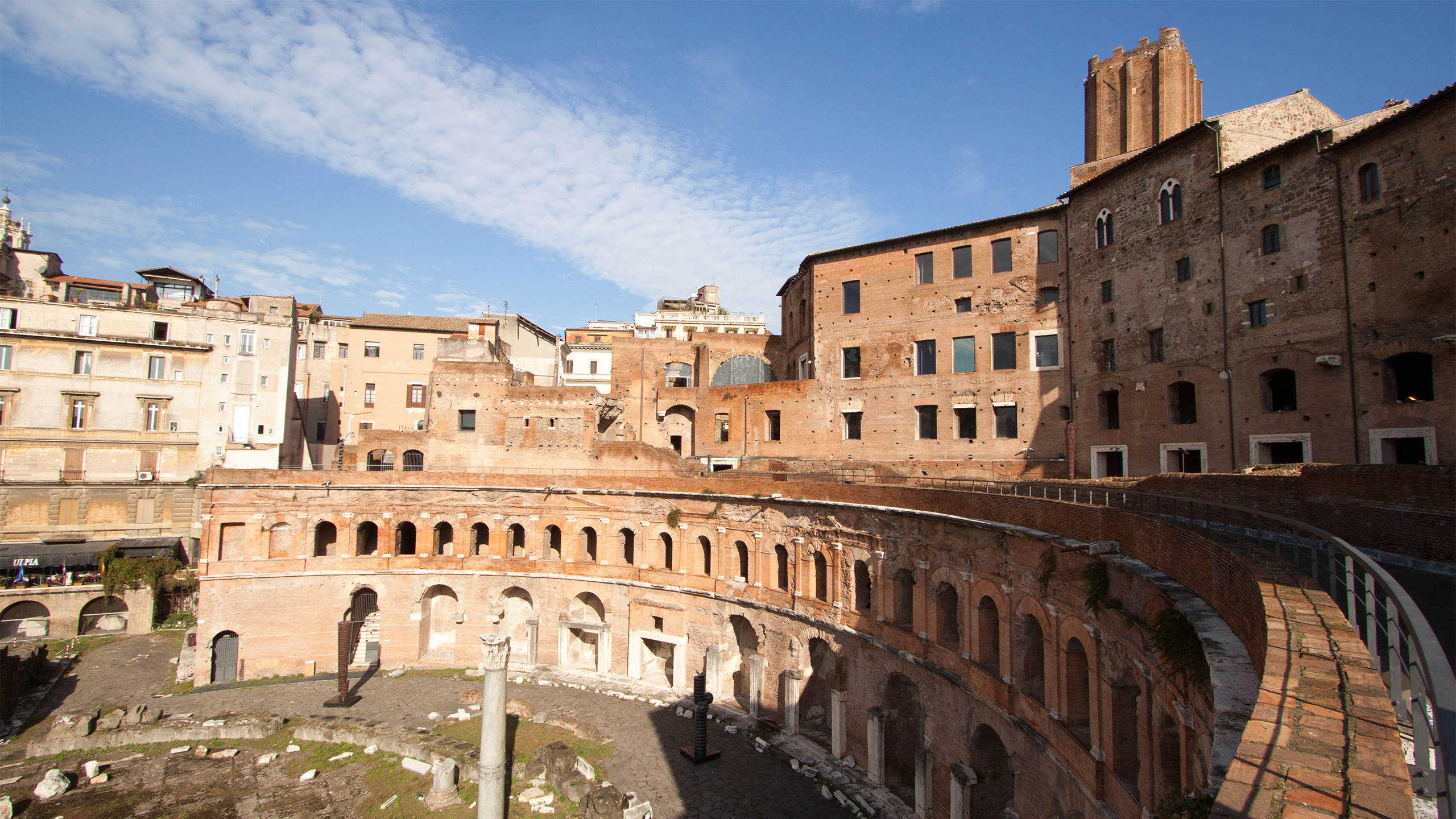 The Forum of Augustus
Going on, you will find the Forum of Augustus, built the successor of Caesar, Octavian Augustus, Rome's first emperor. It was built together with the Temple of Mars Ultor, promised to God by the emperor, before the victory of the battle of Philippi (dating back to 42 B.C.). The area was inaugurated only forty years later, when the works of the second large square dedicated to Augustus finished. The forum has an orthogonal plan and on the northern side the temple of Mars Ultor was situated, on the back wall, separating the area from the Suburra district.
The square was inaugurated - probably when it was still incomplete - in 2 B.C., when Augustus was awarded as Pater Patriae (father of the land). He had just named his nephew Lucius Caesar to be his successor. Thanks to the new square, Rome had more spaces for trials, although the most significant function of the Forum was to be a representative centre, addicted to the glorification of the Emperor and his ancestry. To further enhance the area new statues inspired by many protagonists of the national history were placed, such as Aeneas, Romulus and the members of the Iulia gens.

The Temple of peace
In 75 A.D., Vespasian had just conquered the Holy Land and Jerusalem. And so, between the Forum of Caesar and the one of Augustus another space was created named to the victorious emperor. The area was not included in the Forum at the beginning, but simply known as the Temple of the Peace.
Only during the age of Constantine they started to call it "forum". This square-plan building looked more like a museum-garden than a religious building, so many were the tanks full of water and statues. Defined by his contemporaries as one of the wonders of the world, it was inaugurated in 75 A.D., after the triumph in the Jewish wars, dedicated to the Augustan empire, restored by the Flavian Dynasty. The area was completely destroyed by a large fire, but in the age of Septimius Severus (3rd century A.D.) it was almost entirely rebuilt to place the Forma Urbis Severiana, a large marble map of Rome partially visible nowadays.

The Forum of Nerva (or Transitory Forum)
To connect the remaining space between the forums and the Temple of peace, emperor Domitian decided to build another square, he had no time to inaugurate: he disappeared in 96 A.D., nominating Nerva as successor. The square was named "Forum of Nerva" and became part of the Temple of Minerva, goddess of the Empire. The Forum was also called "transitory", because it actually was a way stage. The square had a narrow and long shape, with no porticoes on the sides: the walls - stone blocks covered by marble slabs - were decorated by columns close to the bottom wall, supporting an entablature.

The Forum of Traiano
The forth forum is dedicated to Traiano who completed also a part of the work Domitian had started. This new square was designed for forensic activities, but especially to welcome the military camps. The column of Trajan is the decoration of the square, telling the events if victory over the Dacians. After the built of the square, followed the inauguration of Trajan's market, the Basilica Argentaria, and the restoration of the Temple of Venus Genitrix took place. By the square, you get in front of the the Basilica Ulpia, the largest religious building of the Imperial period. It was built between 106 and 113 A.D., designed by Apollodorus of Damascus, in the forum dedicated to the emperor. In front of it, the amnesty procedure took place, the slaves were broken free by their former master. A few steps from the Trajan's Column and its forum there is the Hotel Cosmopolita, a modern structure built in the heart of ancient Rome, from where you can enjoy a splendid view of the entire archaeological area and some of the most evocative monuments of the capital. A romantic way to visit the Eternal City and its endless historical and architectural beauties.